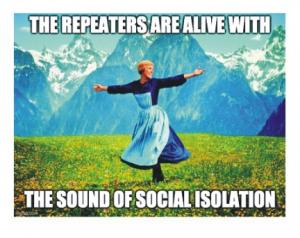 Nets were held at least once each day from March 20 to June 26, with an average of 53 check-ins on each IRG net, 27 average on the HF portion.  There were a total of 112 amateur radio operators taking part in the nets over the period.  Most combined VHF and HF nets took less than 20 minutes, and on peak days, net control stations Al Thurber (VE1RG) and  Dennis MacDonald (VE9AAE) logged over 100 amateurs who made the net a part of their daily schedule.

"It was satisfying to see the level of interest in amateurs who were making their presence known each day throughout New Brunswick and beyond," said Al Thurber (VE1RG), president of the International Repeater Group (IRG), and one of the net controllers.

"Although it wasn't the type of emergency activation involving loss of communication, it was a good chance to test our level of response, the repeaters and our radio communication ability in a multi-day emergency activation.  There were indeed a few short, local interruptions of internet and government radios during the activation, so EMO was glad to know that we were ready to help had the outages been more serious," he added.

During any activation of the NB-EMO PEOC, amateur radio is on stand by to provide any emergency communications to agencies if there is an overload or failure of normal means of communication.  The provincial  EMO was activated at Level 3 (Full Activation) on March 19, and over 100 municipal, regional and First Nation emergency operation centres, and the Emergency Measures Communication Group began three daily nets to advise amateurs of the situation and check operation of the IRG linked radio system.  The nets were later reduced to once per day at 5:00 pm and included an HF session on the 80 metre band.

This activation was different than normal, in that everyone was operating from home.  Normally, many operators would be making use of provincial and local emergency operation centres, but staffing at those locations was kept to a minimum to reduce the spread of any disease.

Now that NB-EMO has reverted to the monitoring level, and the daily COVID-19 nets have ended, regular scheduled nets will be continue on the IRG system.  If there is a return to full activation and daily nets, IRG members will be notified via the web site, e-mail and announcements on the IRG repeater system.

Here is a summary of the statistics for the NB-EMO COVID-19 nets: