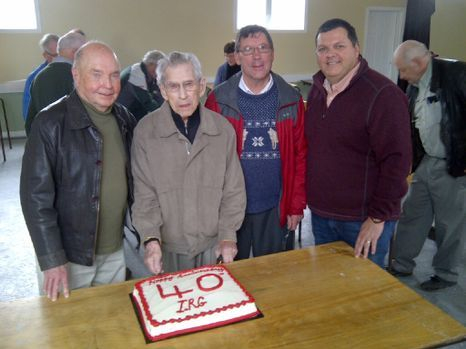 A highlight of the meeting was a presentation of a new Life Membership card to Claude Bailey, VE1HU.  Claude was the first president of the IRG, and was instrumental in establishing the province-wide system of repeaters, in close collaboration with the New Brunswick government.

Now in his 99th year and still active with almost 80 years as an amateur radio operator, Claude was recognized by his peers with a standing ovation.  Claude attended the meeting along with his daughter and IRG member, Joan Powell VE9JC  (formerly VE3ZC).   Yvon Hachey, VE1VON, President of the IRG, presented Claude with his new card.

"Our system is the envy of amateurs across Canada", noted Francis Pitre, VE9FCP, Vice-President.  He remarked that through the work of those in the past, we have a network of repeaters that covers all of the province and beyond.

IRG Past President Al Thurber, VE1RG,  recounted the first meeting of the IRG and how Claude worked to provide amateurs a platform to communicate, and to help during times of emergency.  The result is the robust IRG system that now covers the entire province.  Founding member of the IRG, Aubrey Urquhart VE1OL spoke on the work done by Claude and others to give amateurs a means to operate on radios and modes that were new at that time, forty years ago.

"Always remember to wave the flag of amateur radio when you have an event, and invite your local politicians so they know what we are all about,"

In other business, members reviewed Bill 41, An Act to Amend the Motor Vehicle Act (NB), which will remove the restrictions for amateur operators using their two-way radios while mobile.  Bill 41 has passed third reading and now just awaits Royal Assent.  The IRG presented a special recognition to Al Thurber, VE1AKT for this work on Bill 41.

"Always remember to wave the flag of amateur radio when you have an event, and invite your local politicians so they know what we are all about"  -- Al Thurber

"Always remember to wave the flag of amateur radio when you have an event, and invite your local politicians so they know what we are all about,"  Thurber told the members.

Work continues on the fine-tuning the complex network of the link controllers, as part of a major overhaul of the IRG system.  Over the last two years, the repeater system has been upgraded and converted to a digital microwave linking system, along with other radio systems maintained by the provincial Department of Transportation and Infrastructure.  A new map of the system is now available on the IRG web site  ( http://irg73.net )

The members agreed to sponsor a special event in June, commemorating the forced landing of a Russian plane on Miscou Island, en-route to the World's Fair in  April, 1939 .   A special event call sign has been granted, VX9MOSKVA and more on this event will be available on the IRG web site as the event draws near.  Much appreciation goes to George Dewar VE9GFD for spearheading this event.

After the meeting, members enjoyed the usual delicious pot-luck dinner that has become a hallmark of the IRG meetings.  The fall meeting date was set for September 28 in Upper Kingsclear.